A just-published report examined a number of topical investment issues, and reaffirmed that we remain cyclically bearish on bonds. That said, technical conditions for developed market (DM) government bonds are becoming stretched, and another pause in the uptrend in bond yields is probable, as occurred last year. Perhaps a cooling in the inflation data this summer, due to base effects, might calm bond investors and newly-hawkish central banks for a period of time.

However, the cyclical backdrop remains bond-bearish, with global economic momentum holding up despite the war, even for the euro area, as confirmed by the most recent PMI surveys. Meanwhile, the cyclical inflation outlook in the U.S. and Europe, and other DM economies excluding Japan, is worrisome and we expect inflation to hold well above central bank targets in the next few years. U.S. forward markets, however, having been late in anticipating higher policy rates, are now expecting both a sharp rise over the balance of 2022 and 2023, following by an easing in rates thereafter.

Rarely have investors accurately forecast such a distant reversal. Keep in mind that this same group, unlike MRB, did a poor job anticipating the large increase in policy rates, despite strong economic momentum and the significant rebound in inflation over the past year. Ergo, we expect rate expectations (and bond yields) to move meaningfully higher before the next easing cycle comes into view, and the latter outcome could be far in the future. 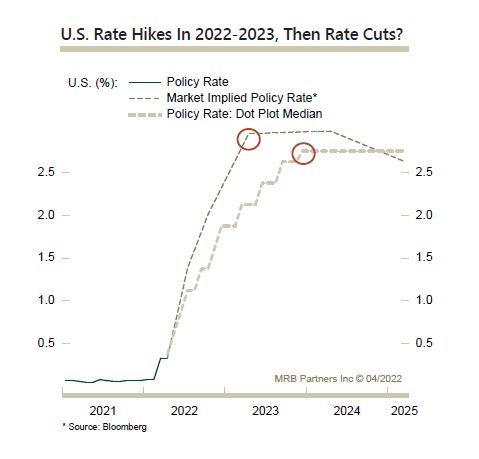 This website uses cookies to improve your experience while you navigate through the website. Out of these, the cookies that are categorized as necessary are stored on your browser as they are essential for the working of basic functionalities of the website. We also use third-party cookies that help us analyze and understand how you use this website. These cookies will be stored in your browser only with your consent. You also have the option to opt-out of these cookies. But opting out of some of these cookies may affect your browsing experience.
Necessary Always Enabled
Necessary cookies are absolutely essential for the website to function properly. This category only includes cookies that ensures basic functionalities and security features of the website. These cookies do not store any personal information.
Non-necessary
Any cookies that may not be particularly necessary for the website to function and is used specifically to collect user personal data via analytics, ads, other embedded contents are termed as non-necessary cookies. It is mandatory to procure user consent prior to running these cookies on your website.
SAVE & ACCEPT
Complimentary Access