The Fed has now done a complete 180 degree flip since hiking rates last December. While trade tensions and general economic uncertainty, magnified by the downturn in manufacturing activity, have deteriorated this year, the overall U.S. economy has not been weak enough to warrant policy easing. Nevertheless, the Fed has opened the door to easing.

Forward markets have already discounted three rate cuts over the balance of the year. This is far more than is warranted based on current economic trends, unless the trade outlook were to darken further and infect the broader economy. To this end, next week’s Xi/Trump meeting at the G20 Summit could prove critical.

The bottom line is that we expect that any “pre-emptive” rate cuts in the near term will eventually need to be reversed, reflecting our underlying positive economic outlook. 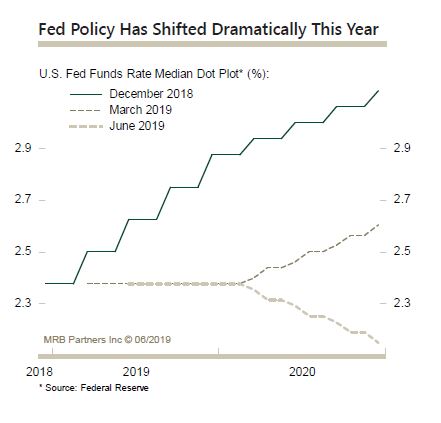