There has been a huge divergence between the U.S. consumer and manufacturing sectors this year. The latter is contracting and fueling recession concerns. The former is still riding the wave of solid employment demand and rising wealth.

Last week we examined the relationship between these two sectors, and it turns out that such a marked divergence has occurred fairly regularly; in fact, the current episode is the third of the decade. Past periods of consumer resilience and weak manufacturing have usually been resolved in an economically-positive fashion, with manufacturing eventually recovering. Conversely, recessions have occurred whenever the ISM manufacturing index has dropped below 50 and the Conference Board’s “job plentiful minus hard-to-get” indicator has declined by nine or more percentage points from its recent peak.

The current episode is consistent with previous false recession signals, as the employment gauge has actually risen since the ISM index dropped below 50 in August. The 2012 bearish ISM signal also coincided with an advance in employment, and the 2015 ISM sub-50 reading coincided with only a small and brief dip in employment conditions. Current hiring plans, layoff announcements and new unemployment claims do not suggest that consumer confidence is on the cusp of a meaningful decline. 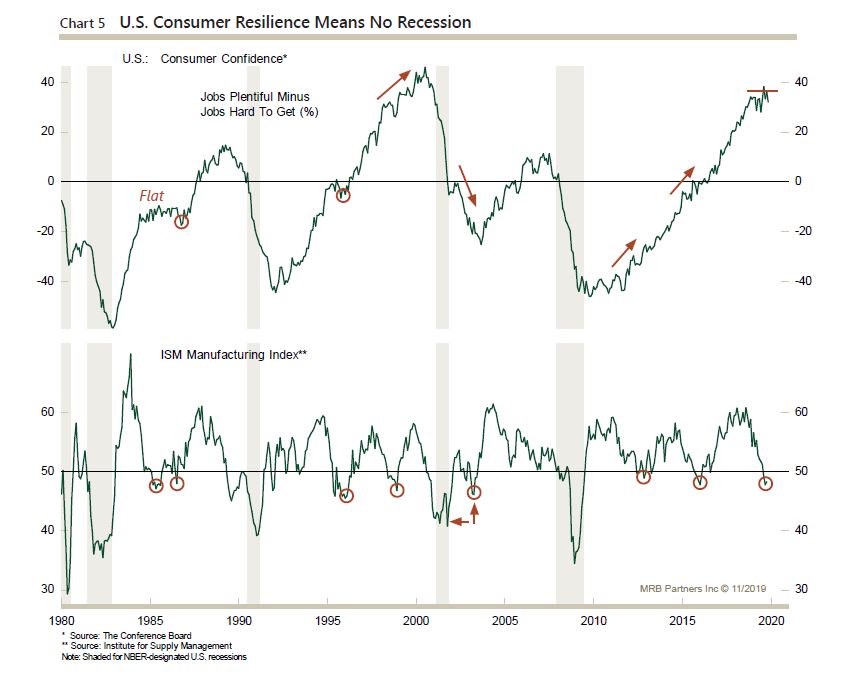